I try not to get too much into the political arena with my blog and other publications, reserving my writings primarily to the relationship of needing to apply Godly truths to health, healing, or the caregiving in the healing process. Being a health care provider for now over thirty-five years, I have seen the steady degradation of health care from one of a Natural, believing in God for healing, towards a control-based, Pharma driven, insurance or Cabal induced cage, that has pressed both my wife and me to seek more God based alternatives, write about these findings, and then spread the information any way we can in our limited environment.

But after witnessing a clear sign in the heavens yesterday, today I felt it imperative to report at least what we have seen for others to see as well.

I believe the Black Horse as reported in Revelations 6:5-6 has appeared.

This image above was taken from a report by MrMBB333 in his youtube post “Over 200K w/o POWER as 2000 mile long Sky River SOARS into West Coast” while it played.

In particular, at the 55-second mark of the post, he reports a sunspot that is coming around and facing our Earth as we speak. As I watch I am seeing A BLACK HORSE shape form and clearly being demonstrated on the face of the sun.

I nearly fell off the couch, I showed it to my wife and she said the same thing “It looks like a black horse even has what looks like the saddle straps on its back.

Without getting too much into the Biblical interpretation of the passages, of which I by the way am not worthy in any way to call myself a biblical scholar, I merely wish to pass on what it speaks to me.

Revelations 6:5-6 “When He broke the third seal, I heard the living creature saying, “Come.” I looked, and behold, a black horse: and he who sat on it had a pair of scales in his hand. And I heard something like a voice in the center of the four living creatures saying, “A quart of wheat for a denarius, and three quarts of barley for a denarius; but do not damage the oil and the wine.”

My wife and I both believe everything we have heard about the recent election fraud, and the inevitable need for President Trump to declare Marshal Law in order to clear out the Satanist who wish to control and rule our world, putting an end to this worldwide child trafficking and mass eugenics agenda once and for all. I believe that this represents a scale of justice movement worldwide and this is happening now.

We like many other followers, research for our self truths, and put the pieces together as we try to ascend along this wonderful journey we call our life in this seeming End Times Biblical world. Too many signs to be coincidence suddenly become Godly absolutes, this seems clear especially these days. Many people report these findings but we are responsible to observe them and then pass them on to others who are willing to see them. 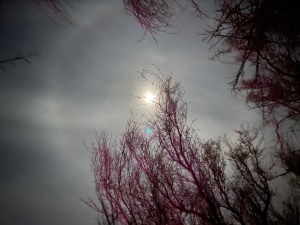 Last night, as often is our ritual before going to bed, we went out into our garden looking up to the stars asking God for a sign that we are not just crazy with what we see going on. A full moon presented a particularly beautiful image of an enormous aurora quite unusual even as auroras go. So I took a picture and was amazed to see what looked like an angel appear on the horizon. What was interesting was to the naked eye there was nothing but clear sky visible? 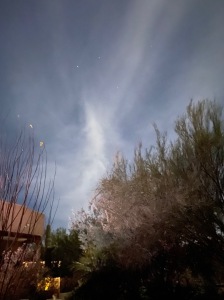 I went on to take other pictures in various other directions, which were also clear skies to me, although my wife commented about seeing the angelic images with her naked eyes, again Angel images appeared.

The Angel looked like it was spreading its wings literally across the sky, the body which can be seen in the image appeared to me as normal dark skies with only a few stars, with only the faintest of wisps of dark shadows in the sky to demonstrate something was there? Yet Anna said she could clearly see the images, they even appeared hooded like a dove with wings. 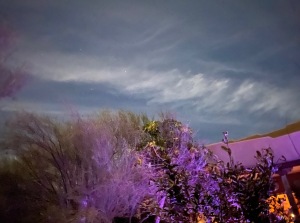 When I looked at the only clear clouds in the sky, a single row of clouds in the western sky it really didn’t look like much to the naked eye, yet when photographed my wife Anna immediately was astonished to comment “It looks like a whole advancing line Army of Angels like in some kind of military advance or attack.”

Today my wife was amazed to realize that people all over the country seem to be posting pictures of Angels in the sky. This is highly unusual and seems to confirm what we saw. 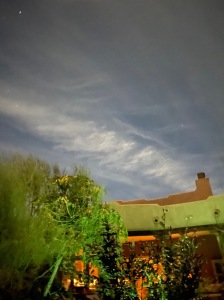 I believe we are in the middle of the event spoken of in Revelation, and the scales spoken of refers to Scales of Justice that are coming as we speak for the perpetrators of these evils around our globe. The Cabal, the Deep State, the Illuminati, call them what you will, would control, mark, enslave, and even eliminate a large portion of the rest of us in their greed to capture this world that God has given each of the rest of us. But more importantly than this, I believe that justice is coming for those who have participated in the abduction, torture, and killing of innocent children, women, and even men for Satanic ritualistic purposes.

Anyone who has participated, profited from, or has been a part of the organization needed to perpetrate such horrendous acts as those revealed and reported recently against children, are guilty of crimes against humanity itself and deserve any fate that justice dictates. 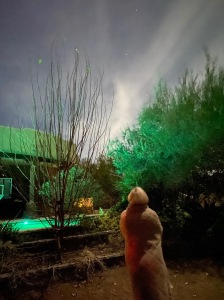 God, Himself also said; “It would be better that millstone was placed around your neck and you would be thrown into the abyss, then to hurt one of these little ones.”

Our littlest children are the purest of creation, and anyone who would harm them or participate in the inflicting of harm, drink their tormented blood, or consume their flesh, by such an act, I believe, step away from the very essence of humanity itself. They cease to be human any longer, in essence, sell their souls to satan.

I do not claim to be any kind of Biblical scholar other than reading it for myself and trying to interpret it as best as I can, based on my own experiences, and what feel is right in my own heart. That being said when Jesus says “all sins are forgiven except those against the Holy Spirit” in my own heart I believe He may be speaking of “A Holy Spirit” such as resides in a child? I may be wrong but what is Holier than the spirit of a young child?

By Peter and Anna Colla

“Dear Lord, help us in this End-Times war, give us sight to see, and ears to hear your Words as they express themselves all around us. Help us all Ascend into Your heavenly awareness as we become one with you. Help our brave President Trump, your Angels, and the many men and women fighting the good fight as they further bring your righteous judgment onto those who perpetrate such evils against us.”

If you wish to learn more about Anna and Peter Colla and their work of blending Godly truths with Mind, Body, and Spirit treatments feel free to visit our website;

http://www.gems-of-health-and-wellness.com     where you can download a free copy of their books 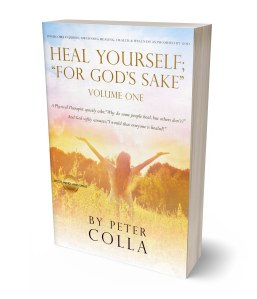 This entry was posted in Charity, COVID-19, Dreams, Gems of Health and Wellness, God and Healing, Health Care Reform, Jesus, Love of a Child, Marriage. Bookmark the permalink.