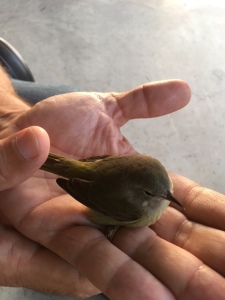 What a joy it is to feed the creatures of morning light, the soft cooing voices and symphonies of fluttering sounds lift up the dry desert in its early hours and echoes sweet scents of being alive. Majestically highlighted are the images of light as they pass through the grasses under green flowered trees and soft drifting clouds, they themselves humming in almost indistinguishable tones, as their own deep praises for their creation sing among the many painted hues of this perfect masterpiece of day.

How gentle are these creatures, these sweet birds and how perfect do they feed among the seeds and scattered beans, thrown out in the yard for these blessed lives’ to come as they will dancing themselves in unfathomable yet unmistakable rhythms of their own desires? I have often fantasized that these birds may be in fact massager’s of God, sent early in the morning to sing out announcements of the glory that this particular day presents.

Mankind for centuries and in every culture has looked at the comings and goings of birds as signs regarding the desires of all of their gods. And if the One True God can create a bird to fly between the earth and heavens above, as most of us believe angels do, then how inconceivable is it to believe He might wish to send messages, signs or even dispatch these gentle creatures as angels unaware for us to there again possibly see His Majesty? Perhaps one day if we ourself look up enough, we to might fly with the mere thought and desire?

Today also was such a day, a morning quiet and accented by the softest of strokes, its gentle breezes flowing through only the tips of newest branches of the trees. They sway soft and free, slightly bending in the most humble reverences, back and forth their movements like the most subtle breath of a sleeping baby, pure and new in its contented existence.

It is nice on such a morning to just walk quietly around the house. Feel the sun-warmed earth under feet and touch the firm strength of the stone pebbles as they set their own strengths and life’s function against your feet. They give their support for your path as God has put His child on, and they, in turn, have the honor of supporting this walk. What a long journey they these stones have made, and wonder myself if this one event, this one opportunity, to support a Child of Him who created them, somehow becomes known to them themselves? Are they somehow in conscious thought as to why they were created in the first place, and if so are they somehow aware of this life task? How joyous it would be for them at this very moment, after millennia of waiting, endless days of sitting, nights of cold anticipation, to suddenly experience a touch with One whom all of this was created for.

Oh, how they must cry out in their own joy! Could we possibly hear them? I think so if we are quiet enough and listen with soft ears. One can almost hear the joyful praises of them as we finally touch them in consideration of their beauty or strength. Isn’t a Conch shell a perfect example of this? If we put out ear to it, you can clearly hear the soft quiet roar of their oceans voice, and the trumpet effect like some glorious megaphone, amplifying the voice of this gentle object as it praises without end. 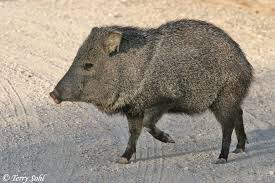 Suddenly I turn and standing before me is a javelina, a full grown female. A gentle creature coming to perhaps take a bean or two that I left for the birds. She is startled by the sudden and unexpected witness to her attempted bean theft. But not so startled that she scurries away because frankly I am not convinced she even sees me looking at her?

Unmistakable is their relations to the pig; they look like one, act like one, even smell like one often times, but their oh so much smaller stature leaves one often to consider whether they are closer to rabbits in relations then pigs. This is possibly also done to their continued ever-present state of fear and non-confrontational attitude. For they are normally and often seen in groups, relying on the strength of their numbers, hiding their heads behind each other or the seeming safety of brush and shadows. These timid creatures are built more for the foraging of roots and small fruits lying closest to the ground then more noble and lofty ambitions set even in the space between the heavens, like birds.

Let us take our little guest herself, we will call her Miss Piggy.

And while many would say she comes from noble stock, it is somewhat comical the sight that presents itself; short stocky little body, thick little legs, and those ridiculous little feet, way too small to support her round body they must hold. Not much of a path destined for her to walk with such little feet, as a matter of fact, it is difficult to even to recognize the tracks of these little animals leave after sneaking in at night? Sneaky little pig you do so love to sneak around at night.

She really can’t see much her eyes are so small, is it because she is normally such a creature of the night? Did God create her with such bad eyesight, or is it because she is always staring at the dark dirt of the night? Probably not, and while her constant fear prefers the night, it is only because the bright light hurts her eyes so much. Obviously, she only sees what is right in front of her, that immediate gratification resting in the dirt at the end of her little a bit to long nose. 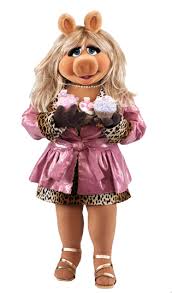 Those little ears covered in that thick hair of hers, she really doesn’t hear well at all, but is that because she can’t or just chooses not to? Funny I call the dog not to go near her, and as I do, she turns a completely different direction then both my sound or that of the approaching dog makes. What a comical sight turning around as if to chase her own tail when nothing at all is approaching. I have no intention to irritate her, one never knows about these creatures, and I heard they may viciously attack seemingly random anything they feel suddenly threatened by, so better to keep the dog away. I have also heard that when provoked they will so viciously attack, and often in directions completely opposite where the irritation actually originates, that this may even attack their own family or babies unaware. Is this because they cant see or don’t hear so good, or is it because they are so indulged with things of themselves, as piggies often do, that they really have no clue the consequences of their actions?

This poor little one, Miss Piggy seems to have hurt her left front leg, limping, almost resting it in the air at every moment, did she break it? Must not have been much of a break, she puts weight on it, at least once in a while. Maybe it was just a warning? Those front legs, the ones she uses to gather food, the work of her hands, one might say, what were you doing Miss Piggy with those hands that resulted in such pain? Did you put them someplace they didn’t belong? Did you do something, some path, some rocky road you shouldn’t have taken those oh to little feet down?

Well, today you were spotted sneaking in and trying to steal a bean. Where are your friends? Why are you alone? Maybe they are not so bold, maybe they know that creatures of the night should stay in the night? Sneaking around at night, nobody hardly knows you were there, those ridiculous little flat feet, they really don’t leave any signs? Built for quiet sneaking around! Shouldn’t you really stick to the night, Miss Piggy? Your dark color, your unmistakable stink, you are so easy to spot when you step into the light. Almost comical you trying to steal a bean from those winged creatures that fly in the heavens, they have no concern for you, no fear as you walk by, for you are no threat to them at all. Take all the beans you want for they will get many more, where they came from.

Funny how creatures cannot help but show their true nature? How nature reveals in its own light the images of the actions of our lives. How some caterpillars eventually look up and then fly in butterfly colors of winged spring. How snakes merely slither in the dust and pebbles they so desperately desire to poses, always crawling into the dark holes of the earth to escape the light that blinds their day.

Are we so different? Do we not as people stuff our emotions like every bite of chocolate and eventually bust from the overwhelming stretch of the wineskin swollen past the breath of human recognition. Some burning inside with the lies and filth in our mouths until even our own lungs rebel in cancerous uprising? People can love and emit love and beauty throughout their entire lives, and people can hate, eventually becoming ugly with the grimaces of the thoughts they so feed themselves every moment of every day.

Birds or pigs, creatures of the heavens or creatures of the night, how simple are the choices we have been so freely given through this glorious gift we call each day? We only must stop and choose, do we wish to see the light, or concentrate on the shadows these bright light cast?

“Lord, let me ever look to the heavens, let me be as a creature of the light, lifting my face out of the dust and giving thanks for the gifts the You so freely give.”